An Outbreak of Forged Signatures

Collectors and librarians may wish to be alerted to the emergence of a number of books with obviously false signatures by Auden. The false signatures share many common characteristics, and most or all seem to derive from the same source. If you encounter a doubtful signature not listed here, please communicate with makerofweb-at-audensociety-dot-org (but in the form of an actual email address).

A few samples are noted below (a few links may be defunct). Other such items will doubtless come to light and will be noted here.

Some titles offered by the Attic Gallery Sydney:

In 2022, and possibly earlier, Attic Gallery Sydney was offering for sale though Biblio.com a number of signed Auden titles with forged signatures. One was the Some Poems, describe above, previously offered for sale in 2019 by a bookseller in Sydney who used the identificiation "sydneylights". The others were signed copies of Epistle to a Godson (not the same copy listed above), Collected Shorter Poems 1927-1957, The Dyer's Hand, and both a first edition and a later reprint of Collected Longer Poems. The last of these was especially noteworthy, because the book was Faber's 1975 reprint edition (the bookseller included a photograph of the copyright page), and Auden had apparently signed the book at least two years after his death in 1973.

When an interested potential buyer notified Biblio.com that the books were suspect, Attic Gallery (in the words of an email message sent to the W. H. Auden Society) "agreed that they were suspect and had them examined[;] they were then confirmed as fake." The gallery confirmed that all the books came from the same source, and that the gallery had removed them from sale. (This occurred on 24 February 2022.) The Gallery commendably had the books "examined" after being informed that one of them had a signature written two years (or more) after Auden died.

The gallery, having withdrawn these titles from Biblio.com, continued to offer them on eBay (under the seller ID "atticism"). The gallery had been offering them on eBay since 2019, but the W. H. Auden Society had not noticed them until April 2022. The titles still on eBay in April 2022 were Some Poems, The Dyer's Hand, Epistle to a Godson, and the first edition of Collected Longer Poems. (The posthumously-signed reprint of Collected Longer Poems was not listed on eBay in April 2022; there is no way of knowing whether it had been offered earlier.)

At the time when the Attic Gallery had been offering these books through Biblio.com, one obvious sign that Auden had not signed them was that (in each book except Some Poems) he had not drawn a line through his printed name, as he invariably did when signing a book. The interested potential buyer informed Biblio.com in February 2022 that the absence of this line made the signatures extremely doubtful, and that notification eventually led to the titles' removal from the Biblio.com listings.

In April 2022, in the eBay offerings of these books, Auden's printed name was lined through in all four titles, not only in Some Poems as before. In the three newly lined-through copies, the line through the printed name was in a different-colored ink from the ink used in the signature on the same page, but the lines on all three pages seem to have been written in the same ink. The page-revision lists for the auction pages of the three newly lined-through copies (but not for the already lined-through Some Poems) indicated that photographs were added or deleted on 24 February 2022. This was the same day on which the Biblio.com listings had been removed.

The illustration below makes clear the differences between the earlier Biblio.com offerings by Attic Gallery Sidney and the later versions of the eBay offerings by the same gallery. Note that, in addition to the newly-added lines through the printed names, the signature on the title page of Collected Longer Poems has acquired an underscore. 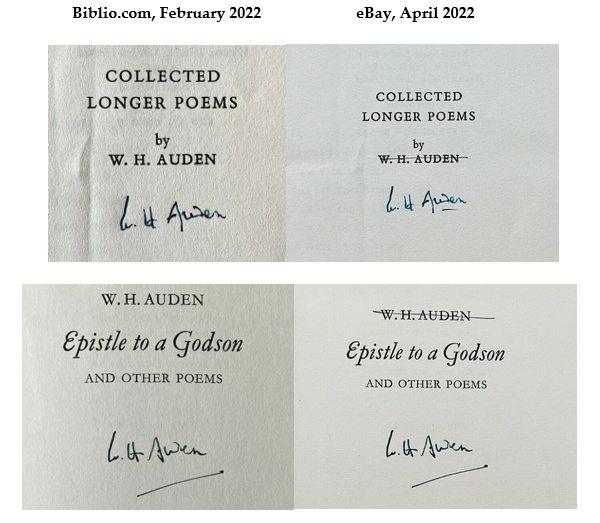 Apparently on the same day that this information was added to the current page (24 April 2022), all four of the Auden titles offered by the Attic Gallery became "no longer available" on eBay. The Attic Gallery is to be commended for having withdrawn these doubtful titles not once but twice, first from Biblio.com, then from eBay. Now that the Gallery has again withdrawn these four doubtful titles, potential buyers may feel confident that the many other signed books  offered for sale by the Gallery are, without exception, absolutely authentic, and that the signatures they have of Philip Larkin, Leonard Cohen, Gabriel Garcia Marquez, and many other writers were written by those authors, and not by the forger who pretended to write Auden's signature. Furthermore, these many signed books were presumably acquired from different sources from the one that supplied the doubtful Auden titles, and are therefore above suspicion.

Return to the list of notes or to The W. H. Auden Society home page